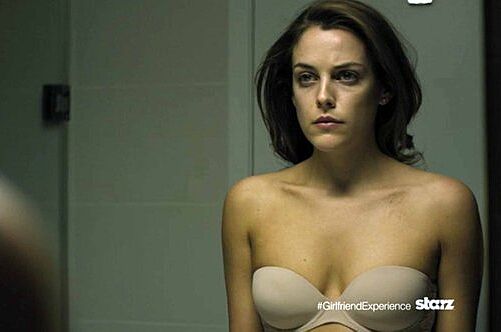 ‘The Girlfriend Experience’ is a take on the empowering, sexy and mysterious motivations of the life of an escort.

Can an undertaking like this be successful? Considering society’s opinion of sex workers is the narrative truly able to be unbiased, raw and gritty? Do viewers really want an insider perspective?

It’s impossible to answer any of these questions until after the show airs. I haven’t seen the series and only recently came across the marketing campaign. The trailer is intriguing because of the editing choices. But it got me thinking.

The plot of the show is clearly laid out. The best part of the trailer is when Riley Keough’s Christine Reade goes from apathetic law student to fully enabled escort. Particularly, toward the end of the trailer she boldly exclaims that she actually likes it. She made the choice to do this type of work not just because she needed to. And she’s in control of her decisions. Despite the judgmental opinions. At the end of the trailer she doesn’t let an epithet define her, furthering the true selling point of the character study.

Getting people interested in a new show is complicated. As someone who watches a lot of TV, there needs to be something really interesting to get my attention. What I watch, is much more selective than it might initially seem. But the truth is I am very picky.

Generally, I wait for a show to prove itself before investing my time. In most cases it’s something that’s recommended to me by a friend or someone who has proven to have excellent taste in TV but occasionally, a trailer speaks for itself.

The Leftovers, Orphan Black and UnReal won my viewership and maintained it through their trailers. In each series, there was something inherently interesting about the topic. Familiar actors helped as well, but there was a discussion that made these shows seem worth watching.

These shows are examples of dealing with everything from loss, agency and the darkest parts of our soul that sometimes need nourishing. They are all different genres. And the themes aren’t just found in the subtext. And there’s something to be said for the shows that can exist in a climate that relies on the boisterous noise of fandoms.

To name another, Mr. Robot creates a community by taking in the darker elements of everything from drug abuse to mental illness all under the illusion of hacker culture and the underlying heroism of being able to take down a corporation from the inside.

Most recently ABC’s American Crime‘s second season added a different voice to the current conversation of rape culture and aside from mixed feelings about the way things played out that’s still the issue that got me watching in the first place.

It’s the kind of societal commentary that makes certain TV shows more relevant than others. Not every show should have something valuable to say. But for the ones that do, it is the idea that there’s a certain amount of power that’s worth the risk in starting that dialogue.

Starz’s new series The Girlfriend Experience, based off the Steven Soderbergh film of the same name, isn’t trying to be original. But it will be groundbreaking because it’s opening up a conversation about the escort lifestyle. In the interest of further context the official synopsis states:

The Girlfriend Experience follows Christine Reade, a second year student at Chicago-Burnham Law School and a new intern at the prestigious firm of Kirkland & Allen. Working hard to establish herself at the firm, her focus quickly shifts when a classmate introduces her to the world of transactional relationships. Known as GFEs, they are women who provide “The Girlfriend Experience” – emotional and sexual relationships at a very high price. Juggling two very different lives, Christine quickly finds herself drawn into the GFE world, attracted to the rush of control and intimacy. Lodge Kerrigan and Amy Seimetz are the co-creators, writing and directing all 13 episodes. It also stars Mary Lynn Rajskub, Paul Sparks and Kate Lyn Sheil.

The whole thing reads like a borderline horror film but from the perspective of both the person who can perpetuate the horror and is also stuck inside it. It’s akin to Gillian Flynn’s sociopathic thriller Gone Girl. Not unsurprisingly it hits some of the same notes about empowerment through a less than savory lens.

The best part is the characters aren’t expected to be likable. There’s an incredible difference between the relatable aspects of a character. The secret is figuring out that they don’t need to work in tandem. And the parts of ourselves that are relatable aren’t always the parts that make us likable. There’s a reason so many problematic characters resonate with fans. And that’s okay. We’re all a little problematic. It’s part of the human condition.

The show-runners have said they’re not trying to take a stand on whether the ideas of sex work are good or bad but just, “to explore how do you drop into these situations of ready-made intimacy, and how do they affect you, and how far can they go, and what these relationships are really like?” And it’s an important narrative. Sex work still has such negative connotations. But the show isn’t looking to redefine those assumptions and it doesn’t have to.

There is this unrelenting conclusion that women who are sexual outside of the norm are somehow deserving of being ostracized. Never mind the fact that exceptions within the norm are still incredibly constricting in 2016. And that is where Christine’s story will find it’s voice. She likes sex. She’s found a way to make that literally work for her. Everything else is an accessory to that analysis.

This speaks to everything I find interesting in TV. The portrayal of female characters is something I have focused quite a bit my writing on. And it’s one that deserves attention because it’s not just about creating strong women. It’s easy to comment on autonomy and agency in shows that focus on women but even more so in a field that has a perception for a lack of any.

The common thinking is that women make the choice to delve into some form of prostitution because they have no other options. And it’s a misconception that perpetuates acts of violence against women who simply enjoy sex.

It creates a real life culture of the same. But Christine is more than her job. And just like any anti-hero series, it’s what happens when the lines blur. Which part of these characters is the one that wins out in the end?

In the case of the anthology (and mythology) of this particular series, Christine gets swept up in the “intoxicating” world of The Girlfriend Experience. The adjective makes it sound like a drug and an addiction problem. And perhaps it is. The larger questions is it for us to decide?

As I already mentioned, Christine tells us, and those who try and knock her down, that this is something she enjoys doing. She’s an educated girl looking to make some extra money. It’s pragmatic. Anyone who has ever been up to their eyeballs in debt, regardless of their job prospects (or lack thereof), has had to make a difficult decision to keep doing what they love. Isn’t that what leading a satisfying life is about?

Giving up part of yourself in order to maintain the who you are. As opposed to giving up your dreams just to make a living. It’s the dichotomy of compromising part yourself for a greater benefit. And a human story in a world where people are often considered less than.

That’s what makes character driven stories – like The Girlfriend Experience – so important. It’s just as compelling as a man like Breaking Bad‘s Walter White who cooks meth to get ahead. And no different from the open relationship of House of Cards’ Frank and Claire Underwood.

Both shows are narratives fans continue to excuse because people find parts of themselves. They’re critically acclaimed series because they showcase the depraved places people will go. Which is what makes one about the topic of sex work so interesting. There’s a lot people get wrong, especially when the focus becomes less about the sex. And that’s why The Girlfriend Experience has an opportunity. It’s not an untapped space but it’s one with a lot of hurtles.

Compelling TV about divisive topics isn’t new. And done correctly they carve out a space for their conversation, whether they have an agenda or not. Considering we let these shows into our bed (literally many of us watch TV in our beds), it’s no surprise we become intimately connected to whatever it is we might be watching. The question is where do viewers draw the line? At what point does a show make it too personal.

New episodes will air weekly on TV, but the whole season will be available to stream from the premiere date via the Starz Play app.