Baron Corbin is one Intercontinental Championship win away from becoming a bona fide top-tier talent on the WWE roster.

At the onset of 2017, Dean Ambrose became a two-time Intercontinental champion by beating The Miz on the Jan. 4 edition of SmackDown Live. Days later, I stressed in an article that he must maintain the momentum of the title by defending as regularly as Miz did during his decorated reign.

Well, thus far, Ambrose hasn’t put too much focus on the title in the time he has held it. Some fans have even compared this title run to the one he had with the United States Championship years ago, where he rarely ever defended it.

Aside from a successful title defense against Miz in a Lumberjack match on the Jan. 24 SmackDown, Ambrose hasn’t put the gold up for grabs at all, including at Elimination Chamber. Instead at the event, he was involved in the WWE Championship Elimination Chamber main event, where he was eliminated second by Miz.

Thankfully, his involvement in that match served a purpose. Once he beat Baron Corbin, The Lone Wolf proceeded to annihilate Ambrose around the chamber and ensure he was ousted from the bout moments later.

Two days later on SmackDown, it was all but confirmed that the two will be on a collision course toward WrestleMania when Corbin ambushed Ambrose before his bout with James Ellsworth, making his intentions clear that he has his sights set on the Intercontinental Championship. 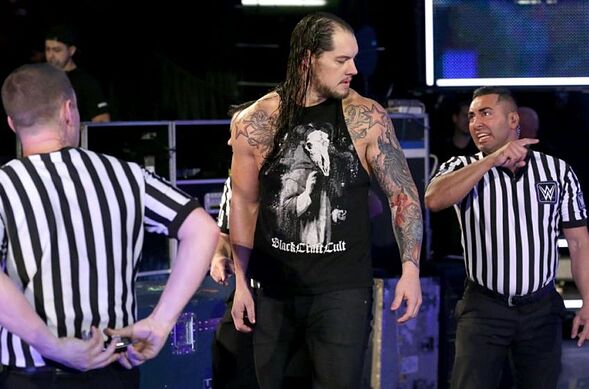 Shortly following Corbin’s memorable WrestleMania 32 debut where he won the third annual Andre the Giant Memorial Battle Royal, I discussed why he was the monster heel WWE desperately needed.

That was before Superstars such as Braun Strowman and Samoa Joe arrived on the scene, but Corbin still has plenty of untapped potential. His initial feud with Dolph Ziggler didn’t solidify him as a star, but his gradual rise to super stardom has proven to be beneficial for him in the long-term.

In the last few months alone, he has truly come into his own as a dominant one-man wrecking machine on Tuesday nights. His series of matches with Kalisto exceeded expectations and he subsequently shined in his shots at the WWE Championship on SmackDown and at Elimination Chamber.

AJ Styles, John Cena, Randy Orton and Bray Wyatt are seemingly already booked in other matches at the pending pay-per-view, so Ambrose and Corbin were SmackDown’s sole Supertsars without a WrestleMania match. Thus, pairing them together is an excellent use of both men.

Considering Ambrose hasn’t had the most memorable Intercontinental title reign, Corbin must be next in line to capture the championship. And there isn’t a grander stage for him to finally receive his first taste of gold than WrestleMania 33.

From his intimidating presence to his above-average mic skills, Corbin has all the tools necessary to be a believable main event player. Additionally, SmackDown is the perfect platform for him to further hone his skills and not be overshadowed by bigger names like he would be on Raw.

However, to place him among the elite in the world title scene right now would be premature. As noted, he has done exceptionally well every time he has been granted the opportunity to contend for the prestigious prize, but WWE shouldn’t rush his ascent to the top.

In the meantime, he should continue building credibility by winning the Intercontinental title from Ambrose. Besides, The Lunatic Fringe would be better off in chase mode while Corbin rules the blue brand’s midcard scene with an iron fist.

Of course, it is entirely possible that WWE waits until after WrestleMania to do the title change, but that would hinder the hot streak Corbin has been on lately. Not to mention it would a fitting culmination to his rookie year on the main roster.

Once he wraps up his rivalry with Ambrose, Corbin has a number of fresh feuds awaiting him with Miz, Styles, Cena, Apollo Crews and others. Once seen as a stepping stone to the WWE title, the Intercontinental Championship could be exactly what Corbin needs in order to cement his spot as a main event caliber competitor in WWE.