Mad About You will be back on November 20. Here’s everything we know about Spectrum Originals’ revival so far.

We last saw Mad About You‘s Paul and Jamie Buchman on May 24, 1999, when the series finale, “The Final Frontier” aired on NBC. After seven seasons and 164 episodes, Paul Reiser and Helen Hunt were finished with their characters—so finished, in fact, that the finale went on a journey forward in time, answering just about every question that viewers could possibly have about the Buchmans’ future.

But the future had a big surprise in store for Reiser, Hunt, and the entire Mad About You family: That final frontier wasn’t so final. Spectrum Originals, a brand-new network hosted by a cable provider that (at least in today’s current form) didn’t even exist when the series ended is airing this year’s 12-episode revival. But what should viewers expect?

Here’s where you can watch the Mad About You revival (and more options will be available as soon as possible).

At least for now, the only way to revisit the Buchmans is on Spectrum Originals, on-demand. But the team is working on getting a wider release for the many, many Mad About You lovers that want to take a trip over to apartment 11-D but don’t have the ability to get a Spectrum account. Paul Reiser told Decider that he isn’t sure what the solution is yet, but discussions are definitely happening:

There are huge pockets of the country that don’t have Spectrum, and I don’t have an answer for them yet. “How can we watch it?” The only answer if have now is, “You got to come to my house, because I’m going to retire someday. The plan is shortly we’re going to close a deal with somebody else, like a Netflix, or Amazon or somebody. Or Apple, to put it out more widely.

Nearly all of Mad About You‘s core characters will be back, with just a few notable exceptions.

Obviously, Helen Hunt and Paul Reiser will be a part of the Mad About You revival. Otherwise, we’d have to call it something else; and people would probably be much less interested. Some characters can only ever be played by the original actors; and there are absolutely zero people who aren’t Reiser and Hunt who could play Paul and Jamie Buchman.

There is one Buchman who has been recast, though: Mabel. As reported by Deadline, Abby Quinn will play Paul and Jamie’s daughter. (She had previously been portrayed by a few child actors; and, of course, the adult Mabel in “The Final Frontier” was played by Janeane Garofalo.)

Looking toward Paul and Jamie’s extended family, the legendary Carol Burnett is back as Jamie’s mom, Theresa Stemple; and Cynthia Harris will once again be Jamie’s arch-nemesis-slash-mother-in-law, Sylvia Buchman. Neither Paul nor Jamie’s father will be around, though—both Louis Zorich, who played Burt Buchman, and Carroll O’Connor, who played Gus Stemple, have passed in the time since Mad About You ended. (Although, technically, the first actor to play Gus, Paul Dooley, is still alive and kicking; so, who knows?)

You can also expect to see John Pankow as Paul’s cousin Ira and Anne Ramsay as Jamie’s sister Lisa. This is definitely the kind of news we needed to hear because realistically, it wouldn’t be Mad About You without them. 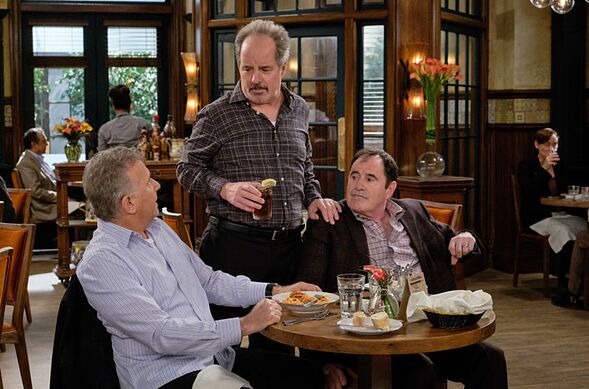 Richard Kind and Jerry Adler are also returning (as Mark Devanow and Mr. Wicker, the building super, respectively). There has yet to be any confirmation on Leila Kenzle’s Fran or Lisa Kudrow’s Ursula. Of the two, it looks like Kudrow is the best bet, at least as of TV Insider’s September article:

“Maybe,” Reiser teases. “We haven’t figured it all out yet.”

The Mad About You revival will feature similar opening credits to the original series, complete with a slightly tweaked version of its original theme.

People first broke this news, and the series’ official social media posted a video of the updated credits on twitter soon after. If watching it doesn’t make you feel like you’ve taken a trip back in time, you might want to make sure everything’s working correctly.

We are TWO WEEKS away from the #MadAboutYou limited series event on Spectrum Originals!

To celebrate we're giving you the ultimate feels with the new opening titles! Sing it with us… pic.twitter.com/eu9kB5GK4G

Even with all this nostalgia, the Mad About You revival will feature some changes.

Most notably, forget about what you thought you learned about the Buchmans’ future in “The Final Frontier.” Here’s what Variety learned from the series’ new executive producer, Peter Tolan:

…Tolan hopes “that not many people remember the finale” because in picking the characters back up at this time in their lives, “we’re futzing with time a little bit” and “the things that you saw in that might happen in the future, but some of it won’t, so we’re not strictly being held to that finale. I’m pretending it didn’t happen.”

Tolan also told Variety that the Buchmans are getting a new dog. (Realistic or not, we probably would have been fine with an immortal Murray, though. Just saying.)

On a more exciting note, Cloris Leachman will appear “as Mrs. Mandelbaum, one of Jamie’s therapy patients.” That tells us two things: First, Jamie Buchman has made a major career change, which tracks with her original Mad About You trajectory of quitting public relations to go back to school, then getting involved with public relations—and even the political side of it—once again. Second, it bears repeating because she’s kind of a big deal (as is anyone who gets the Helen Hunt calling them “Queen” on instagram): Cloris Leachman is the new girl in Buchman Town (also known as New York).

We’re not supposed to announce guest stars yet but when the Queen pays a visit, you have to shout it from the rooftops. #clorisleachman @madaboutyou.in Nov 20! Be there!

Here’s a big change for Mad About You that deserves its own special mention: more women behind the camera.

This one comes courtesy of Helen Hunt herself: At least four episodes of the Mad About You revival will feature women directors; and the premiere is directed by Hunt herself.

So I directed the first episode of #madaboutyou Then we had the spectacular #BetsyThomas And we just finished two episodes with the magnificent #KellyPark. She is talented, experienced, confident and humble. All the best qualities wrapped up in one wonderful person. #womeninfilm pic.twitter.com/dhTZvPkVaK

That means at least one-third of the total of 12 episodes will be directed by women, a huge increase from the 15 out of the original 164 (just under 10%). Oh, and the first AD? Also a woman.

I was just insane enough to direct the first episode of our @madaboutyoutv reboot. Then the incomparable #BetsyThomas took over and directed three episodes BEAUTIFULLY. The whole thing is being held together by #NatalieVanDoren our spectacular 1st AD. #womeninFilm @directorsguild pic.twitter.com/SjIaketRY0

Next: Mad About You: Ranking all Thanksgiving episodes

That’s definitely a reason—as if we needed any more—to be excited to watch the Mad About You revival on Spectrum Originals.

So, what are you most excited about for the Mad About You revival? Let us know in the comments!