The eagerly anticipated Queen and Slim from Lena Waithe and Melina Matsoukas arrived in theaters this week. Does it live up to the hype?

From the first trailer for Queen and Slim, it appeared to have all the trappings of an Oscar-bait film. A social commentary, a strong well-regarded lead, an award-winning writer, and it introduces a new actress and new (to feature films anyway) director. You can gather from the trailer that it would be a movie some would find controversial as well but that just means more conversation around it.

On one hand, I loved the way the film was shot. Matsoukas captures a lot of beautiful moments in the darkness that hangs over the movie. Waithe did an amazing job with the dialogue. While some of it felt almost too poetic at times, the characters all felt very authentic to me. At the same time, I left wondering how I was supposed to feel or what I was supposed to gain from the ride that I went on.

After walking out of Queen and Slim I was reminded of movies like Manchester by the Sea and Fruitvale Station for different reasons. I typically like to keep my reviews spoiler-free but I will have to contain some spoilers in this one so if you don’t want to know anything going into the movie, you should save this and come back after watching the movie.

Again, there are many beautiful scenes in this movie. I would say that some may become iconic in the long run but I don’t want to be a prisoner of the moment. From the trailer alone I can tell you that the picture of Daniel Kaluuya‘s Slim and Jodie Turner-Smith‘s Queen leaning on the car is one of them. Melina Matsoukas is great at capturing a moment and there is a lot of beauty in this film. That beauty keeps Queen and Slim from being a long and dark movie. You can get lost in a moment with the characters, just taking in the scenery.

At the same time, Lena Waithe keeps you laughing throughout the movie as well. Between our two leads butting heads for a good bit of the film and the array of colorful characters they meet along the way, there were a ton of funny moments. Again, the humor is a great way to keep your mind off the darkness that hangs over the movie and wondering what is going to happen to Queen and Slim.

Finally, the music. The music was great and this is also not surprising considering who was in charge of the film. There was one scene where a gospel song was playing and I was confused initially, but when you realize why it was playing it creates a moment. Music can ruin an ok film or enhance a good one and it did the latter here. 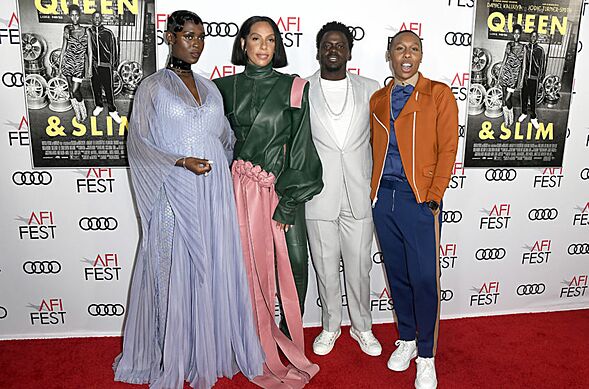 This is where we really get into spoiler territory so, again, stop here if you want to go in without knowing how the movie goes.

A movie like Queen and Slim is a risk for multiple reasons. There are only three ways this movie could end, realistically, and each one is going to upset a segment of the audience. If they get arrested or killed it’s going to disappoint a lot of people who wanted to see them get away. If they get away some people will question how they did it. When making a movie like this you have to go in knowing that you’re going to upset someone with your ending so you have to choose who.

The team made a call here and that call is part of what I question about the film. When Manchester by the Sea ended I was upset because I felt like I didn’t get an ending. You took me through an emotional ride just to leave me with nothing. I felt some of that here as well.

I bring Fruitvale Station up for another reason.

Recently the idea of a movie that was good but you could only watch once came up on Twitter and Fruitvale was at the top of most lists. Rightfully so. Like Fruitvale, Queen and Slim holds a mirror up to society rather than speaking to what society should be. The reason I can accept Fruitvale being this way and be disappointed by Queen and Slim is because Fruitvale Station was a true story that had to be told that way. Queen and Slim is fictional and by only holding up that mirror I didn’t feel like I gained anything from watching it.

There were good cops and bad cops, there were good people and bad people. Depending on who you are as a person determined how you felt about what you saw on the dashcam footage and how it affected you. These are things we already know when we walk into the theater. The love story aspect was strong but still overshadowed by the social commentary so it may not stick for many.

I saw a comment from someone who said Jordan Peele got it right. With Get Out Peele said that he initially had an ending where Kaluuya’s character, Chris, is arrested at the end. They then decided that wasn’t the way to go and created the ending where the friend arrives. He included the original ending as an alternate ending in the DVD but most agreed it was great to see Chris win at the end. Had he not, Get Out likely doesn’t become the success it was.

I enjoyed the ride, for sure, but it told me it was taking me somewhere, just to drop me off back home. I thought it had the opportunity to do more.

Queen and Slim is currently in theaters nationwide and is receiving rave reviews from critics and audiences alike.