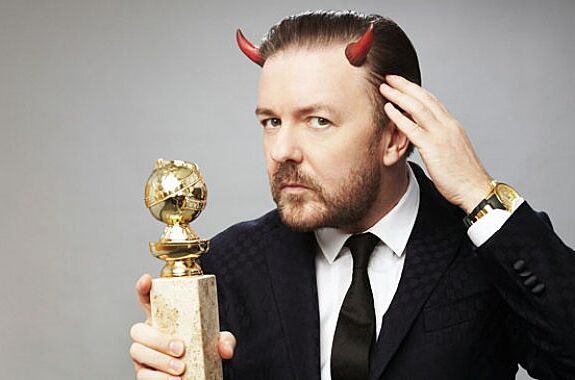 Ricky Gervais took full advantage of his outsider Brit status and roasted the Hollywood crowd gathered at the 77th Annual Golden Globe Awards, in the vein of anti-hero comedians Andy Kaufman, Richard Prior, and Lenny Bruce.

I don’t know what the Hollywood Foreign Press Association (HFPA) was thinking would happen when they asked Ricky Gervais to host, but the controversial comedian wasted absolutely no time in offending everyone in the room.

Some of them were clearly upset (Jonathon Pryce looked like he wanted to hurl things at the British comic, with Tom Hanks’ silent groans echoing many in the room), but Gervais put on a fearless, profane-laden hosting performance, whether you were horrified or delighted with the in-your-face approach.

Rather than the boring, glad-handing affair the Annual Golden Globes has become in recent years, the evening took on a certain excitement based on the liberal roasting that Gervais put on. It all began with a pretty infamous monologue, where he talked about riding in a limo with plates that were made by Felicity Huffman. After the audience groaned, he continued unabated, saying he felt sorry only for her daughter.

He didn’t stop there, however, and continued the scathing rebuke of the Hollywood power structure. The opener skewered Cats—particularly James Corden and Judi Dench—Leonardo di Caprio’s predilection for young girlfriends, sweat shops employed by Apple, Jeffrey Epstein, and so much more.

“So if you do win an award tonight, don’t use it as a political platform to make a political speech. You’re in no position to lecture the public about anything. You know nothing about the real world. Most of you spent less time in school than Greta Thunberg. So, if you win: come up, accept your little award, thank your agent and your God and f**k off. OK?”

That was how Ricky Gervais ended his opening monologue. Here’s the shocking introduction in its entirety:

The creator of the original Office show, Gervais has always been known for his edgy humor and he put it on full display in his fifth stint as Globes host. He wasted no time in addressing the controversy over HFPA’s lack of female director nominees despite several strong showings from women directed films this year.

“I’ve had a word with the Hollywood Foreign Press, and they’ve guaranteed that will never happen again,” Gervais joked. “Working with all the major studios, they’ve agreed to go back to the way things were a few years ago when they didn’t even hire women directors, and that will solve the problem.”

It may have offended some, but there was brutal truth to his humor, painfully so.

The award show host was just getting wound up, however. The savage takedown continued. Ricky Gervais used the introduction of Birdland’s Sandra Bullock to go for the Jeffrey Epstein joke, ending by telling the audience to “shut the f**k up.”

The AfterLife star fired another shot across the bow by saying that the Hollywood executives in the audience “have one thing in common: They’re all terrified of Ronan Farrow. He’s coming for you, he’s coming for you.”

Nothing was sacred, with the comedian even nixing the idea of an “In Memoriam” segment. “Not diverse enough… too white.”

Ricky Gervais concluded the show, imploring the jaded audience to get through one last quip, saying good night with, “have a great time, get drunk, take your drugs, and f**k off!”

But in all honesty, what were people expecting? This is not new territory for Ricky Gervais—although, admittedly, he was in particularly savage form on Sunday—and anyone who has watched his hilarious show Life is Short knows that he goes for the jugular with his humor. His past spat with Johnny Depp from a previous Globes hosting gig was uproariously parodied on the show.

Next: Making sense of The Witcher timelines

One thing’s for sure, Ricky Gervais has guaranteed that the 77th Annual Golden Awards ceremony is one we will not forget. Whether or not the comic will be asked back is another matter. But it doesn’t look like the infamous host cares anyway.