Superstore mourns Myrtle by deciding what to do with the inheritance she left Jonah, while Dina reunites with her long-lost father.

Leave it to Myrtle to say goodbye to her fellow Cloud 9 employees with the parting gift of drama. Superstore celebrates the late Linda Porter and her character Myrtle with laughs, and what could be funnier than Myrtle strangely leaving an out-of-the-blue inheritance of $1,000 to Jonah? Although he’d like to use it on a vacation, Glenn wants to buy Myrtle’s way into heaven.

Elsewhere in the store, Cheyenne ropes Mateo into the makeup pyramid scheme that’s temporarily making her a decent amount of cash. However, their side hustle crashes and burns just as fast as Dina’s ill-fated reunion with her absent father (guest star Dean Norris).

Let’s recap the latest episode of Superstore with the five best jokes from “Myrtle.”

1. “She still called me Moana sometimes, but at least she saw the movie. Representation matters.”

During the morning meeting, the Cloud 9 crew reflects on Myrtle’s life after learning about her death. From all the things she’d seen, like her Yahoo! email address, to referring to Sandra as Moana, they remember their friend and coworker fondly. Luckily, they still have Hologram Myrtle to keep them company in the break room, but for Glenn, it’s simply a sad reminder.

Once the store gets back into the motions, Mateo catches Cheyenne selling makeup for cash at the beauty counter. She informs him that she’s joined Lucy May (a thinly veiled reference to Mary Kay), a cosmetics company that Mateo quickly announces is nothing more than a pyramid scheme. At first, he wants nothing to do with the scam, but once he sees the wad of cash Cheyenne accumulated after a day of hawking makeup and lotion to her coworkers, he wants in. Unfortunately, the van full of boxes says otherwise about their likelihood of making quick cash. 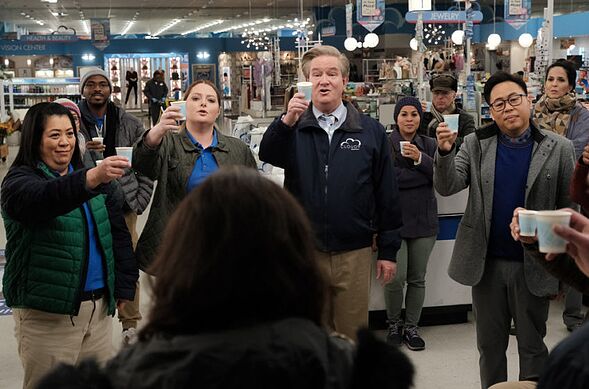 To Jonah’s surprise, an envelope left behind by Myrtle marked for “Sweet Prince Jonah” contains a whopping $1,000. The employees debate whether he earned the money from Myrtle, and even he doesn’t feel right about accepting it. However, he proposes the idea of taking Amy on a trip, and she’s basically already planned their Florida vacation. The wind’s taken out of their sales by Glenn’s grief. He’s searching for signs from Myrtle in mundane things like a Mr. Clean bottle (her celebrity crush). Jonah breaks and gives the money to Glenn, who then gives it to the real scammer, Pastor Craig, to ensure Myrtle makes it into heaven. So much for Florida!

Myrtle’s death hits close to home for Dina because she thinks about how her loved ones must feel. Dina mentions her absent father to Sandra, who assumes Dina wants to extend an olive branch and reconnect. But that’s not her plan. She wants her father to feel the pain she felt growing up. Naturally, Dina coerces Sandra into calling her dad and making him believe she’d died. Sandra all but carries out her mission… until she bends the truth of the lie. Dina’s dad rushes to the store, and she’s initially thrilled to see him. When he takes credit for who she’s become, she rightfully gives him the hurtful but heartfelt piece of her mind he deserves.

Next: The WB turns 25: Ranking the network’s 25 best legacy-making shows

5. “I didn’t even know we had gazpacho and Everclear.”

In the end, Amy and Jonah can’t talk Glenn out of handing over the money to Pastor Craig. They even went so far as to enlist Garrett in chopping up Hologram Myrtle footage and making her say she’s in heaven. Of course, Glenn sees right through the faulty editing, but he can’t see how badly Pastor Craig has swindled him out of $1,000. Amy and Jonah might not get to take a trip on Myrtle, but they led the Cloud 9 crew in toasting to their friend with her foul but favorite drink.

What did you think of the latest episode? Sound off in the comments!